A Smattering of Super Bowl Babble and a Thought on Plagarism 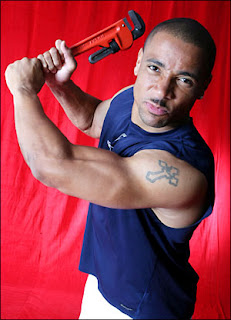 Rodney Harrison (pictured), noted cheater and performance-enhancing drug abuser, spoke earlier this week about his team's performance against the Giants on December 30. Specifically, he talked about the defense, of which he is a part.

I don't have the exact quotes here because I saw him talking about it on SportsCenter, but his general feeling was that he "doesn't want to take anything away from the Giants because they played a good game..." oooh, boy, here we go... "but, we did not play well that day. In fact, that was the worst we played all year."

I see. This reminds me of one of the many times when Fat Charlie used some kind of backhanded comments in his typically classy way and Boilerdowd emailed me and said, "He reminds me of someone who apologizes to you for your reaction, not for his action: 'I'm sorry you were upset after I called your sister a whore....furthermore, I'm sorry she has to dress like a prostitute.'"

That's kind of like Rodney Harrison right now. Yeah, he doesn't want to take anything away from the Giants, but, well, he's going to anyway. We'll see, Rodney. I have no doubt the Pats are the better team, but with a 16-0 record on the line and not a single person on the team suggesting they didn't care about that game, you guys had no reason not to bring your A-game. How about admitting that maybe the Giants game-planned well. Not well enough to win, we all remember, but pretty damn well. 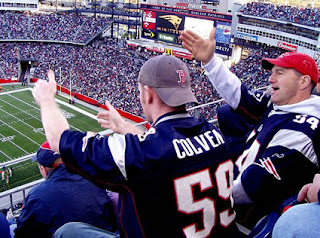 Following up on my post from earlier in the week about classy Boston-based writer Jessica Heslam, her commentary made its way around the 'net, and one of the best follow-ups is over at Joe Sports Fan where they post this picture, featuring a classy Boston fan -- most likely taking a break from reading Wine Spectator -- showing off his love for Purdue alum Rosie Colvin. Only he has Colvin's name spelled wrong. Maybe he has a properly spelled one in his "sturdy" Volvo.

One final note in this post, and maybe it deserves to be its own post, I don't know.... but earlier this week, the fine gents over at Black Heart Gold Pants fired a shot across the bow of another blog, Off The Tracks. Now, I'm not here to defend OTT because it's a Purdue blog -- or even to "defend" it at all. We know Travis a little bit and he's always got thoughts on what's going on at Purdue, in the Big Ten and even across the country. We often don't agree with his takes but that's what makes for healthy debate. Plus, we're jerks anyway.

However, BHGP actually accused OTT of plagarism for this post about the Big Ten basketball programs and Travis' comparison to Simpsons characters.

All I want to say about this is that, as a writer, there is nothing worse that I could be accused of than plagarism. I mean, nothing. If I was accused of a sexual relationship with Tim, it wouldn't even compare. Wait, maybe that's a bad example -- Tim is rather handsome.

But you know what I mean. Again, I'm not legitimizing BHGP's claim nor am I saying they're way off base. But I will say that there's a lot of content out there and the ideas can sometimes be similar and, well, if you think someone is plagarizing, the best way to handle it is probably to contact them directly and give them the chance to a) explain themselves, or b) remove, correct or credit the content in question. I think publicly calling out someone like that is a bit extreme, especially when the supposed plagarizing is at least questionable.

Travis has answered the issue on his site and I think he does a good job, but there's a clear hurt in what he wrote -- which is justified -- and I can't blame him. In addition, if this goes even a step further, it could get rather ugly and we're all supposed to kind of be friends (sort of?) around here.

So let's play nice, boys, and keep the accusations to "your team sucks."

THIS JUST IN -- I'M A PUTZ: As always, I'm an imbecile. I now join the ranks of those who were fooled by BHGP. They were actually joking in their shot at OTT, as evidenced by this post... in which THEY point out that they aren't plagarizers for the same exact reasons OTT isn't. Yes, I'm a moron. I'm saying it here so you don't have to. But you can anyway.
The guilty party in this case is J Money at 1/30/2008

Email ThisBlogThis!Share to TwitterShare to FacebookShare to Pinterest
This will go on the shelf with cheating, classy, Rodney Harrison, Smattering

The way BHGP attacked mgoblog recently was pretty busch league. They seem to be a little on the douchebag side. Maybe they are just bored at how much Iowa sucks in football and basketball.

By the way, you should read mgoblog's post that responds to BHGP. BHGP got absolutely destroyed!

Eh, I know it was a joke and I'll take it as that. My position is well known and as Norman Dale says, "My team is on the floor."

BGHP was only kidding when the jumped on MgoBlog, and Brian over there admitted such... http://mgoblog.blogspot.com/2008/01/joy-of-retraction.html

but the original was indeed a good read.

You might want to check your facts. That dude in the 59 jersey's last name is Colven. His friend got him the jersey like that on purpose. I figured there had to be a reason for it, so I did the research for you.

You are wrong. The gentlemen was trying to spell Colvin, but Patriots fans are generally lacking in intelligence and spelling ability. I researched it.

Putting one's own name on your favorite team's jersey violates many commonly held rules of fandom.

Fact-checking department is on strike, in support of Hollywood writers and Rudy Giuliani's well-run Presidential campagn. (Yeah, I don't get the connection, either.)

Well, I'll jump on board the retard train as well...

When are people going to stop taking us seriously? Listen, the internet is thick with thieves, and we've been "robbed" before, but to mention it only draws attention and traffic to the offender. We started a blog to have fun -- we're clowns, not journalists.

ps We're sorry we didn't nominate you for the bloggies, ok?

Hahah, dude, I already admitted I was an idiot, okay? BEFORE you even posted your comment....