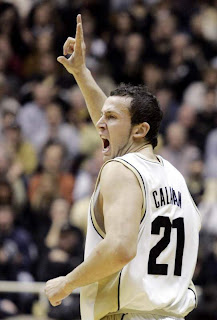 While the Baby Boilers didn't completely follow my formula for success in the Big Ten (at least one player needs to score 20 to win), another player stepped up when needed to give the offense a needed boost. This time, it was Calasan, the former JUCo star who has really played well during the Big Ten season. Nemanja's ability to shoot from 20 feet coupled with his size make him a tough match up for Big Ten big men.

Purdue started the game slowly yet again, and didn't seem to get in gear until about the 16:00 mark in the second half. Illinois kept Purdue at an arm's length riding great play by Senior bigs Randle and Pruitt...But as fouls mounted, Weber was forced to sit Randle and the Illini simply couldn't adjust without him.

While the Boilers JuJuan Johnson, Robbie Hummel, Scott Martin and Nemanja Calasan struggled with Illini players in the post, Purdue's guards shot well again. Keaton Grant's trademark rainbow helped him to continue shooting well from behind the arc; one of his shots in the second half caused me to yell, "NO!" at the TV screen and caused Painter to put his hands over his head in frustration...but Keaton hit the shot. E'Twaun Moore played well yet again and seems to be getting more and more comfortable with his role as an offensive threat. He must be deceptively quick, because defenses struggle with him, but he looks pretty slow on TV. Robbie Hummel, after a slow start, was a shot in the arm for the Baby Boilers during the 20-3 run in the second half. 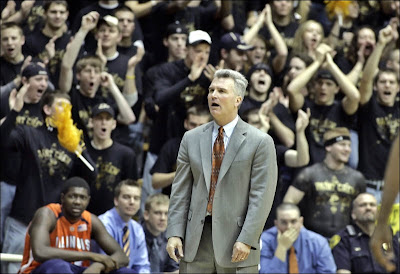 As the game progressed, ex-Purdue coach Bruce Weber looked more and more pitiful as he reacted to what was occurring on the court...the silly flash cards he held up didn't help anything ("Screeners"). I like Weber, but this season has not been a good one for the Illini and many are blaming the coach who took the Illini to the Final Four just a few years ago. Grumblings from Champaign suggest that he might be out at the end of the season...If they fire him, especially with all of the new players in the program, and the tampering by ole Coach Sanctions, they will be making a mistake that another school will quickly capitalize upon. Weber won't be jobless long if that scenario unfolds.

Next up,the Claxton-less Penn State Nittany Lions in Happy Valley...PSU has lost their last three. Purdue needs to win this game to officially drop the moniker "Baby Boilers".
The guilty party in this case is boilerdowd at 1/20/2008

Email ThisBlogThis!Share to TwitterShare to FacebookShare to Pinterest
This will go on the shelf with Baby Boilers win, Nemanja Calasan

Okay, there were stretches of that game in which Purdue could not hit a layup to save their young lives. Seriously, the score would have been much higher if these guys ease up on the glass.

And rebounding is still a problem. When both Pruitt and Randle were in there, Purdue was having a hard time with rebounds. Half the guys don't look like they know how to block out.

Ignoring those things, they looked pretty solid and played defense very well. The Illini looked like they just ran out of juice in the second half.

I know Kramer and Grant were in first-half foul trouble, but I'm more willing to trust Moore with the ball than Crump.

Crump may be fast with the ball but he's creating nothing from it. The baseline drive through from the left side that ended up with another airball teardrop shot had me pondering violence.

So, is it Crump running head long, out of his mind, or is it Painter given Crump an unneeded green light?

I think Crump is simply out of control....I think Painter's tried to reign him in and what we're seeing is Crump as controlled as he can be.

I agree with your assessment of Moore v. Crump.

I was really pleased with the game... one I was actually able to see thanks to ESPN. Mackey looks like a tough place to play again and I love it. I also can't get enough of watching Painter coach this team... seeing a young, energetic coach is just awesome. Future is so bright.

I also LOVED Painter's reaction to the unneeded three-pointer when they should have been running down the clock in the final minutes... priceless. I love that he's so insterested in fundamentals and good basketball.

"While the Baby Boilers didn't completely follow my formula for success in the Big Ten (at least one player needs to score 20 to win), another player stepped up when needed to give the offense a needed boost."

One person did score at least 20 in this game... Keaton Grant dropped 22 on the Illini, so they did follow ur game plan

I agree that this game would have been put away if purdue could have finished their 3 on ones!! There was that play where Kramer I think saved it out of bounds and chucked it down the court....and Purdue blew a layup and a rebound dunk. Ridiculous. That kept happening during that big run, just frustrating. But I think what Nemanja has done lately. He seems to be cool and collected enough to be a leader...plus he made his free throws!!

Do Doris Burke and Pam Ward live in West Lafayette? They both always seem to do Purdue games. At least Burke knows what she's talking about.

anonymous- thanks for the catch!

My formula continues to succeed!!!

E, that play by Kramer was almost amazing...while Grant can hit 22 footers, he can't make layups.