[You may recall that winners of the BS Handsome Bracket Challenge get a chance to post here, if they so choose. This year's winner, Kirk, not only has a decent post, but also uses this opportunity in front of BS's roughly 2.3 billion readers (again, I might have to check the figures) to promote his new site. Check it out to feed your ongoing hunger of all things Purdue and keep him honest. And now, please welcome Kirk.]

A guest post at Boiled Sports?  All for putting the smart money on Kentucky in the NCAA tournament (and narrowly beating J in the process)?  Talk about a dream come true. I mean it.

Not to get all hipster on you, but I’ve been reading the site since 2006 (back when some dude named Tim wrote posts).  As a bored graduate student and university employee, I was kicking myself for not starting a blog like Boiled Sports.  I would have fit right in, you see, my story is all about being Boilermaker.

I was born to two Purdue alums who both grew up in West Lafayette but found teaching jobs in suburban Chicago.  As a kid, we’d make the 2.5 hour drive most fall weekends to visit my grandparents and go to football games.  I grew up celebrating the back-to-back-to-back Big Ten champions in basketball, hating Jim Colletto (learning some new curse words thanks to fans in the stands) but loving Mike Alstott, and wearing my Purdue pride on my sleeve as I combatted all the Illinois, Michigan, Notre Dame, and Indiana fans that lived near me.  I still remember how nervous I was as I saw Glenn Robinson, still in high school, at Ross-Ade watching a game and meekly asked for his autograph.

Despite my roots as a Boilermaker, it took some fortuitous financial incentive for me to enroll.  My bags were packed for Duke (yep, make fun of me all you want, I deserve it), and it seemed odd as I sat in Cameron Indoor Stadium in the spring 1999 as a pre-frosh on a recruiting trip, surrounded by faithful Duke students and watched on the jumbotron as the Purdue women’s basketball team won the national title against the Blue Devils.  I almost got murdered as my silent rooting for Stephanie and Ukari sometimes manifested in loud claps and shouts of “yes!” (I still believe the only thing that saved me from a beating was the fact that the Duke men’s team would be playing the next night for the national title, so most of the Duke fans weren’t too torn up with the women losing).

Apparently that was the sign that I couldn’t resist the siren song of Purdue.  I was incredibly blessed to have the opportunity to spend a glorious 8 years on campus, completing a variety of undergraduate degrees and grad school.  Call me a geek, but it was hard to leave the place and the friends I’d made.

So that’s me.  Why do you care?  Well you probably don’t and shouldn’t, but given that back story is it any surprise that I’m excited to post on Boiled Sports?  And is it also a surprise that I’d do something as shameless as use this pulpit to promote another blog?

That’s right, because you don’t have enough chatter to read about the Boilermakers, you should also check out GoBoilers.net and add it to your RSS feed.  Seriously, I can’t get enough, so even in a world saturated by Boiled Sports (for your educated fan perspective) and Hammer and Rails (for your actual journalism), you can have two more ridiculous guys spouting their opinions, wearing their goofiness with pride, and trying to understand the plight of a Purdue fan.  Bonus points if you appreciate the punnyness of our banner.

Now, I didn’t want this guest post to be purely about me and advertising our fledgling site, so I thought I’d give you all something nutritious, too.  At GoBoilers.net we’re doing an off-season series of “Where are they now” posts, with a special focus on a less than memorable group of guys.  So, exclusive to Boiled Sports, please enjoy the third part of our series, and we hope you read the earlier posts at GoBoilers.net. 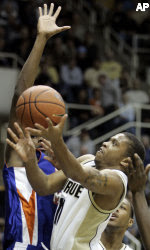 It’s time for the third installment of “Where Are They Now?”  As we continue our look at the “worst year ever edition,” let’s investigate the team’s third-leading scorer.  You read last week about Nate Minnoy’s inability to cut it as a Boilermaker, transfer, eventual falling out with the game of basketball, and legal trouble.  This week, we find some eerie similarities with the life of Korey Spates.

Spates came to Purdue in 2005 as a three-star recruit out of Ohio with speed and the ability to score.  He was runner-up for Ohio’s Mr. Basketball as a junior in 2004, and I remember enjoying his energy during the beginning of the season (despite his freshman turnovers, over 3 per game).  In his first game as a Boilermaker he scored 16 points against Wofford and dished out a game-best 4 assists while getting to the line 10 times.  Not a bad way to start a season!  Like Minnoy, Spates had a big offensive impact on the team as a freshman, scoring 10.1 points per game off the bench though with starter’s minutes, although he only shot 38%.

Unfortunately, Spates only played in 15 games and in late January of 2006, he was kicked off the team for the oh-so-vague “conduct detrimental to the team.”  Spates had been suspended earlier in November, so it was clear then, as it is now with guys like Kelsey Barlow, that Painter gives you the opportunity to grow up and fix your problems, and if you don’t, he doesn’t have time to keep dealing with you.

After leaving Purdue, Spates went to Schoolcraft Community College (sound familiar?), and after a year there, he signed to play at Kent State in 2007.  Unfortunately (or fortunately?) for the Golden Flashes, he never played a minute for the team, being released from his scholarship before the season started.  KSU insiders say it was likely due to grades and overall attitude, as Spates refused to participate in summer workouts and disrespected head coach Jim Christian (now at Ohio).

Free of the demands of Division I basketball, Spates took his skills to Division II’s Valdosta State for the 2007-2008 season, but that looks to be the only year he suited up before disappearing from college basketball. It doesn’t even look like he starred for the team that season, which is disappointing given his talent. 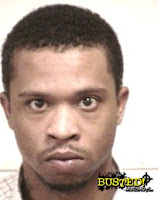 So that’s four schools in three years.  What’s a guy to do?  Well, it’s hard to tell – there isn’t much good info out there on Korey since 2008.  I don’t know if he ever finished any classes, got a degree, or became a rodeo clown.  Sadly, I was able to learn that Spates was arrested in Cleveland in December on charges of kidnapping and aggravated battery.  Yikes!  Possible silver-lining, I can’t find any record of the criminal court proceedings, so maybe the charges were dropped.

If you want to catch up with Spates, see if he’ll let you follow him on Twitter (I had no luck). Hustle or Hope?  Korey always had the former but likely needs a lot of the latter.
The guilty party in this case is J Money at 4/30/2012

Email ThisBlogThis!Share to TwitterShare to FacebookShare to Pinterest
This will go on the shelf with Bracketology BS, guest post, NCAA bracketalysis, Purdue basketball

I love the 'where are they now' series. Can't get enough purdue sports, so I'll stop by your site

Welcome, Kirk. I love the 'where are they now' series too, though sad to read about Spates and Minnoy not panning out. I think I tried googling them a few years ago when they would've been seniors.

Anyone who hasn't gone to GoBoilers.net, go there now. It's a good read.

Thanks for the nice comments guys! Picking this team for our first "where are the now" series is fun, but also difficult, what with so many transfers and guys who didn't last in college basketball. It's a real shame when you think about the talent of some of those guys, and those that transferred though I really wanted to stay (Lutz for example).

This team was my freshman year. Weird to think of how many of them disappeared after that. Played catch with Minnoy a few times outside of Owen and he seemed like a good guy. Sad to see that the two of them fell of the tracks a bit.

Very cool set of articles. I remember loathing Kiefer (didn't he take a last second 3 at Northwestern that year?). But glad to see he's at least making use of his Purdue experience.