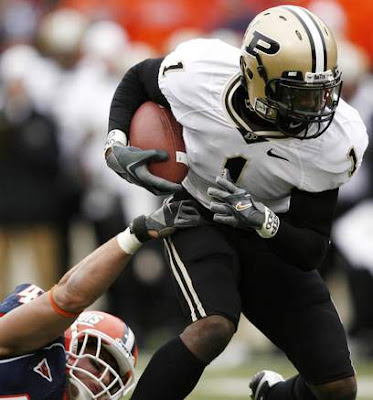 -Domestic disturbance between TWO men and one woman get the police's attention.
-Police arrive, Lymon gets in his car to run from an arrest.
-Can't start the car...so the car stays in handicap spot (which he had placed it in earlier).
-After the no-speed pursuit, Lymon is caught and urinates on himself while the police question him.

Good stuff. Another story not being reported is that Lymon had charges filed against him after he was evicted by an apartment...not sure if they're seeking damages for destruction of property or want money, but it's another example of how Lymon has been simply pissing away opportunity (sorry about the pun).

I think it's all but criminal that Lymon stole Standeford's starting job this year as he should have never been on the team. You honestly can't tell me that Lymon was a better receiver than Standeford this past season despite the athleticism discrepancy. Honestly, Painter should be as relieved as anybody if Lymon is kicked off of the team...Selwyn gave up on more routes than any receiver that I can remember during Tiller's regime. 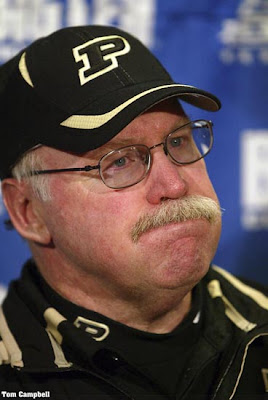 I've heard some grandiose theories about the decline of Tiller...one account says he had a heart attack and as a result, his doctors told him to take it easy. Thus, he laid off of recruiting a bit and has tried to avoid stressful situations (such as close games). Another says he's a changed person in that he no longer interacts with players and has put coaching on "auto pilot" allowing the coordinators to run the practices and in turn the program and hardly every even talks to players anymore.

Regardless of what you hear or believe, I think it's quite simple what's going on. Joe Tiller has gotten comfortable. His occupation pays well, he's doing an OK job and he knows his boss will not fire him nor does he want to. Plus, in his defense, it's tough to continue to do things at a high intensity level as you get older. He turns 65 on December 7...on one hand, he probably would like to retire to Wyoming and fish...on another, he probably feels like he's still capable of coaching. The problem is, he's not capable of doing it the way it needs to be done any longer.

I'll quote Lloyd Carr's presser to illustrate...I think this fits perfectly. "I may look tired but I still have a great passion for the game, the players and competition. But there are some things I don't have anymore. And I know that. It's simply time." Perfectly put Lloyd. While Lloyd wasn't wise enough to beat tOSU any longer, he was wise enough to look at the situation objectively, something Tiller refuses to do.

While I think Tiller seems like a pretty good, genuine guy, like all of us, he has his flaws. I think his biggest flaw is that he seems more worried about his legacy and how history will judge him than by how he's being viewed in the present. Two cases support this idea. First- consistency. Tiller has made it a point to strive for a bowl, any bowl, each and every season. Instead of biting the bullet every few years to build toward a championship, he makes sure his teams are at least .500 every season (Please reference recent quarterback problems as further proof of this theory). Granted, this feat is not easy, but I believe it's short-sighted. Second, he wants to be the winningest Purdue coach. Mollenkopf was 84-39-9 (with 57 Big Ten wins), Tiller is currently 82-54-0 (with 50 Big Ten wins). I'm pretty sure Tiller will never reach Mollenkopf's Big Ten mark, but he should easily get the three wins needed to surpass Jack next season.

I do understand some of the sentiment that the "Fire Tiller" crowd is giving, but, it simply is not going to happen. Joe Tiller, for better or for worse, will be coaching our Boilermakers next season and will probably grab his rod and reel following the '08 campaign- not because he was forced to, but because he wanted to. Let's hope he doesn't do further damage to the program he built in an ironic effort to cement his legacy in the Purdue record books.
The guilty party in this case is boilerdowd at 11/20/2007

Email ThisBlogThis!Share to TwitterShare to FacebookShare to Pinterest
This will go on the shelf with involuntary urination, Jack Mollenkopf, Joe Tiller, Selwyn Lymon drinky drinky

Very, very well said on the Tiller commentary. That just about sums up what I think. He'll enver get fired, nor do I think he deserves to get fired, but he has lacked an edge since the 2003 season at least.

Even in 2002 when we were overmatched in several games our guys played their balls off. Now we're probably more talented, but very laid back.

Does anybody else think it's strange that Joe still has not commented on Lymon? This shouldn't be that hard of a decision.

"Tiller has made it a point to strive for a bowl, any bowl, each and every season. Instead of biting the bullet every few years to build toward a championship, he makes sure his teams are at least500 every season"

Not True. If it were true, he wouldn't have yanked Kirsch is favor of Painter in 2005. Tiller knew that Kirsch gave us the best chance to win but wanted to build for the future.

Interesting. I always thought he did that because Kirsh was a no talent ass clown.

Seriously though, he certainly started 2005 with that "any bowl" mentality. I'm not sure Kirsh gave us that much more of a chance to win.

Matt, you have to be the biggest Tiller apologist I have ever heard of. I understand you want to be a rah-rah guy, but Tiller is not Purdue...Purdue's bigger than him. You defend him in indefensible cases. I get that you want Tiller to stay...for how long? Regarding the Kirsch situation, Brandon was a cancer on that team- plain and simple. His attitude, especially in a leadership position gave Purdue zero chance of winning-that season or any other, once he had mentally quit. At that point, Painter was the only choice. My point stands as Painter probably should have started that entire season if your statement was true about building for the future. Is your last name Tiller?

Nate, I think Tiller is awaiting Lymon to get out of jail before he releases anything...I am hoping he wants to tell him he's off in person.

Travis, I tend to agree with '03 being the beginning of the end-

97-03 Purdue was invited to three Jan. 1 bowls, had a big ten champ & won all three of Tiller's bowl victories.

ACtually, you read the article wrong. He got in his car and drove it across the parking lot into a handicapped spot.