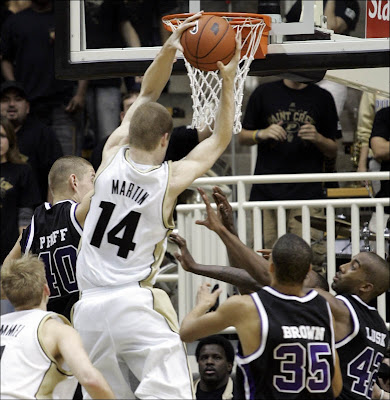 Our Boilers faced off against a guy named David Lipscomb on Tuesday night...and much like Gardner-Webb, David is a good basketball player. Granted, he hadn't won any games prior to last night (and still hasn't), but he held the lead for about 36 minutes of the contest. It could be the fact that he knew he'd be facing a young Boiler team that he could take advantage of or that GBI called this game a glorified scrimmage and he didn't like that. Regardless, it was a bit of a dogfight. One one hand, I'm awfully happy that Purdue could play a close game and pull off the win, on the other, I'm pretty disappointed that this was a close one. But I guess if you're going to be involved in close games, it's impressive, especially for a young team to shake off the bad stuff to get the "W". Purdue at one point late in the game was shooting a frigid 16% from three-point land. Special thanks to Big Ten Network for putting the game on the E-Interwebnet...It was great watching the game with audio and video not in sync as well as well as getting the opportunity to watch it on a 4-inch screen.

Here are my thoughts on the gentlemen on the court.

Martin and Hummel are both very good...they are great team players as they rebound, pass and play defense well. Moore looked good at times, but I think it's fair to say he's no Eric Gordon, at this point (by the way, that dude is ridiculously good...cheating rules!). Chris Kramer plays as if he's trying to end his life. While I really like guys who hustle, he seems to needlessly throw himself onto the court. In all seriousness, he's going to only have a two-three-year career if he keeps playing as he is. All that said, I think it's especially good for the Freshman to see that type of effort. Keaton Grant looked rusty for much of the game, but hit arguably the biggest shot of the contest in the form of a three pointer with not much time left. Johnson desperately needs to drink protein shakes and eat steak. Dude is just so slight that he can't hold his ground at this point. I am stoked to see Calasan playing in the next game.

Other Sports Notes
-Nick Saban is hilarious and crazy. If you haven't had a chance to catch it, watch Sports Center and witness his Tuesday press conference tirade. I loved it. The media guy who asked the question had no clue what he was walking into.

-Suck it, Patriots. Tom Brady admitted on a radio show that the Pats goal each game is to blow out each of their opponents. I hope they get their wish in all of their remaining games. In fact, I hope they score 100-points a game and Brady gets every record he's seeking. Then, I hope they lose their first playoff game by one point.

-Isaiah Thomas is the greatest basketball mind since Latrell Spreewell. His mastery of the game and the psychology behind the game is evident when you watch the Knicks play the game. Even fans in MSG chant his name- fire ISAIAH! fire ISAIAH! I say, Knicks, give him as long as he needs! He'll turn that thing around!

-Eric Gordon is not as good as advertised, he's better. I know I wrote about this above, but he really seems to be very, very good. I think he's averaging over 30 points as he can shoot from anywhere and finishes strong as well. It's a shame the Big Ten stinks and only allows Purdue to play IU once...in Bloomington no less. Thanks Delaney, you are one smart dude.
The guilty party in this case is boilerdowd at 11/21/2007

Email ThisBlogThis!Share to TwitterShare to FacebookShare to Pinterest
This will go on the shelf with Baby Boilers win, Eric Gordon, Nick Saban, Suck it Patriots, Zeke

Actually, Lipscomb was 1-4 before last night. They have won a game.

That changes everything! I now consider this win an upset...San Jose state is a rock-solid win...Losses to App. State, Winston-Salem and MTSU are pretty lousy though.

Our Boilers are a work in progress...and this game was a sign of that. They should be a bit better by the time the BT season rolls around, but they've got building to do and plenty to work on.

Did you guys notice Darryl from The Office sitting underneath the hoop?

MWH, nice eye...was Kelly next to him?

They were also 8/9 from behind the arc in the first half. That's inhuman. You shouldn't be able to do that in an empty gym, let alone with a Big 10 defense in your face. I'm writing last night off as a young team having an off night shooting against a team having the greatest shooting night of their season.

cod- I think it was nearly a perfect storm for Lipscomb- Purdue, a team that needs to rely on their shooting ability due to their lack of beef shot horribly...and Lipscomb came out smoking hot. But, I think Purdue's focus on defensive intensity made the difference and will even more as the season progresses.

At least they got the win, but it was far from a good showing. That said, Wisconsin has been winning that way for years.