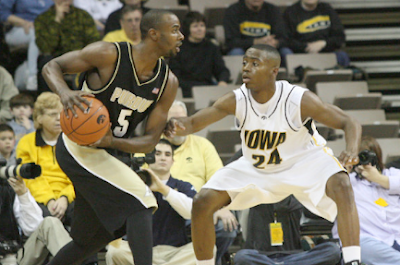 In a move that gets Purdue closer still to dropping the "Baby" from Baby Boilers, Keaton Grant and Co. traveled into a less-than-hostile Carver-Hawkeye arena to win a big game. The league, by most accounts, is filled with non-descript teams...no one is great. Purdue, at this point, fits that opinion. The difference is, Purdue seems to be gaining a bit of momentum and might be starting a significant run that could lead them to the tournament.

Purdue followed my formula to success as at least one player stepped up to score 20 points. Grant reached his career high with 22, but E'Twaun Moore's play impressed me as much as anybody's. He created and made a couple key buckets when Purdue needed them most. In case you have Comcast (which I do, but watched it at a local watering hole), here's the deal- both teams really got after it, but Purdue's free throw shooting, three-point shooting and slashing made the difference.

The next game v. Illinois should be a mere confidence-builder as the beleaguered Illini are simply not playing well this season. That said, they have good, veteran size that could give Purdue fits since, as you know, Purdue's bigs are neither bulky nor experienced. What I'm hoping for is a four-game winning streak heading into the Wisconsin game in West Lafayette. Maybe these young kids will be believing that they actually can finish out a good team by that point...Plus, the students and the rest of Mackey might be reminiscent of '94 if the next few games unfold positively. I'm keeping my fingers crossed.

One thing that really bothered me in this victory is that Purdue seemed to rely too heavily on taking three pointers instead of driving and dishing to create open mid-range jumpers. If they keep that up, my dream for a winning streak will be over in a hurry. You live by the three, and die by it as well.
The guilty party in this case is boilerdowd at 1/16/2008

Email ThisBlogThis!Share to TwitterShare to FacebookShare to Pinterest
This will go on the shelf with Baby Boilers win, Keaton Grant

Agreed. We're way too streaky from beyond the arc to rely on it for more than a game or two in a row.

If it's working though, knock 'em down!

Didn't get to see the game. Can someone comment on whether the officiating was fair because fouls called were really lopsided in the 2nd half? Iowa was in the bonus with 12 minutes to play! If the officiating was okay, then the Boilers need to work on fouling too much.

Also, if you look at the team, Purdue plays 9 guys significant minutes each game. I see the depth as a huge positive especially versus teams like Iowa who played 4 guys over 30 minutes (PU only had 1). Did Iowa seem gased at any point?

Although the 3 point jacking needs to calm down, it does look like they are moving the ball around. 15 assists on 22 made field goals is a pretty good number. Was Iowa playing zone at any point?

I know I have seen worse BT officiating crews, but that doesn't say much. I said to my brother at one point- "these guys are really making sure the home team stays in this one..."

Purdue had pushed the lead to 7 pts., I believe and the refs bailed Iowa out on a bad possession by calling what looked to me to be "under the back"...ridiculous. Summation- they were not good...and not fair.

People who prefer the company of farm animals:

People who I find not as smart as a wet bag of leaves: