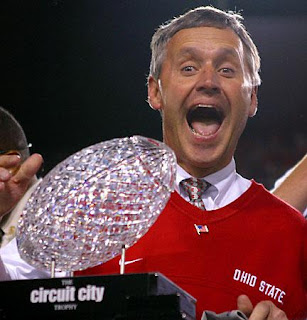 So I wanted to make some comments about random football happenings over the past week and hadn't gotten around to it so you're going to get them in jambalaya format, inspired by the LSU Tigers two-loss national championship season. Way to go, Tigers. Yipee.

Jim Tressel was very excited just to be near the trophy last night, as you can see from this picture, which continues to be one of our favorites.

Anyway, on to my thoughts...

Okay, so LSU pounded on OSU last night. Did that prove anything? No, it didn't. And Georgia and USC look like scary-ass college football teams that, when healthy, could certainly hang with LSU, if not beat them. It would also be neat to make some of these SEC teams travel once in a while. They never seem to leave the southeastern part of the country. Granted, biscuits and gravy and grits aren't served everywhere in the country so I don't know what they'd eat, but they should have to travel, too.

The thing is, college football is so great and then we have this lame-ass ending every year. We've all stopped caring about it and even when Georgia and USC win their BCS games in blowouts, it means absolutely nothing. NOTHING! NCAA, we don't care that you adorn their bowl games with BCS lettering -- it means nothing to the fans. It only means money. And quite honestly, most of us have spent enough money on our colleges and universities. Come up with a better way to end the season or people will continue to care less and less until it starts to affect the regular season. And then you're screwed.

Hey, remember how Boise State got the WAC some respect last year by beating Oklahoma in one of the best college football games we've seen in quite some time? And remember how people were trying to make a case that Hawaii belonged with the big boys because of their supposedly prolific offense and Colt Brennan? Well, you know what we remembered here at Boiled Sports? We remembered that last season, Purdue traveled out to Hawaii and almost took down the Rainbow Warriors in their home stadium. And if Purdue can almost take down Hawaii and Hawaii needs overtime to beat Louisiana Tech and San Jose State... well, it isn't too hard to figure that Georgia might be able to not only hang with the Hawaii offense, but maybe even stop it! So basically, arrogant Hawaii got smoked by a team they didn't even belong on the same field with. The Rainbow Warriors should be out of the Top 25.

On to the pros, now. The San Diego Chargers stormed out to an 0-6 hole at halftime of their HOME playoff game against the Tennessee Titans over the weekend... the Titans led by a guy who can't really throw and whose legs were hurting. Speaking of Vince Young, am I the only one who thinks his career arc is a lot more likely to mirror Kordell Stewart than Randall Cunningham? Remember how Kordell went the playoffs several times with the Steelers but really was the weak link? Running QBs who can't throw accurately don't last in this league... and sometimes they go to jail for killing doggies.

I just found it very telling when the Chargers eeked out a home win against a not-very-good team and then they showed Norv Turner dancing on the freaking sidelines with his players. Can you imagine Bill Belichick doing this? Oh, hell, Tom Coughlin? Or Tony Dungy? No matter a coach's success history, I can't imagine any of them literally dancing and celebrating a win that looked shaky, especially with the defending champion Colts coming up. And further evidence of the Bolts having no idea what they're in for was Phil Rivers in his postgame press conference saying they did a lot of things right and it got them ready to play the Colts. Uh, no sir, no it did not. You're going on the road to play in the dome against a FAR better team than the Titans. I think it's gonna be real ugly. Get ready for the many faces of Norv.

Sean Taylor's Ghost Has Seen Enough -- So Has Gibbs
Hey, remember how when the Redskins beat the Cowboys by 21 to get into the playoffs and all those clowns started barking about how "it's no surprise that we won by 21," attempting to overforce more emotion relating to Sean Taylor (Taylor wore number 21)? While it was a tragedy that Taylor was cut down so early in life, they 'skins (and the league) paid him a very nice series of tributes back when it happened, so it's time to stop trying to connect everything. Because if Sean Taylor is up there making sure you make the playoffs and just for kicks arranging it so you win your playoff-deciding game by 21, what was he doing this weekend? Deciding his boys have had enough fun and causing Todd Collins to throw two interceptions and turn back into a nice mixer (oh, wait, that's Tom Collins)? And just to put the icing on it, did Taylor cause the Skins to lose by 21 this week? Man, who knew Sean Taylor had such a sick sense of humor? Oh, or maybe it has more to do with the fact that 21 is one of the most common numbers associated with football since it's, you know, divisible by seven.

Joe Gibbs has also seen enough and is retiring.... again. Gibbs was hailed as a savior in Washington and he really coached like the gap between 1992 and now was instantaneous... like he skipped over those minutes to instantly arrive at this moment in time. It was definitely time for Joe to dodder back into retirement before he pooped himself on the sideline or something.

Giants Shut People Up -- For Now
Hey, did you know that Eli Manning has more postseason wins than Tony Romo does? Bet you haven't thought about it that way. And the Giants have already lost twice to the Cowgirls this season.... it's pretty hard to beat an NFL team three times in one season, wouldn't you think? I think the Giants might surprise some people this weekend. Their defense looks good and Eli has had no trouble lighting up the Cowgirl defense. Plus, Jessica Simpson went to Mexico with Tony Romo and hopefully rode him like the Cowboy he is, so much so that Tony might be tired out. We'll see.
The guilty party in this case is J Money at 1/08/2008

Email ThisBlogThis!Share to TwitterShare to FacebookShare to Pinterest
This will go on the shelf with football jambalaya, my random thoughts

My thoughts exactly! Make a Pac-10 team come play the Rose Bowl at Soldier Field once in awhile. It's such an advantage for USC and LSU to play these BCS games in their backyards. LSU should come play the title game against OSU in Cleveland in the elements.

Actually in Cleveland yesterday, it was 67 degrees. Not exactly the best example of our frigid January weather.

Let's briefly operate under the assumption that there is no tournament ever. Wouldn't th next best thing to be having at least one NCAA mandated game on every teams' schedule? What if, every year, LSU had to play one game against a BCS opponent, nad they couldn't pick it. Do you really think they could win on the road in Michigan, for example?

Any SEC team other than Vandy could travel to Colunbus or Ann Arbor and win. Yes, it's an advantage to play a bowl game in your backyard, but bowl games are held in destinateion peeople want to co in December and January. Well, other than Detroit and Boise. LSU still would have beat OSU if they were playing in Tempe, Pasedena, or wherever.
Did OSU beat anyone in the top 20 this year? no.

LSU or any other SEC team could not have gone into Beaver Stadium, The Horseshoe, The Big House, or Camp Randall and come away with a win this year.

SEC teams travel the least of any conference for road games. Look at how many miles Georgia has traveled for nonconference games in the last 10 years.....386! And people want to rail on Ohio State for their nonconference scheduling. Read this:

Living in the area, I can't stand all the constant Redskin talk that never ends. That being said, I don't think you should be bashing how the fans and players choose to make a positive connotation with the number 21. Just let it go, it doesn't have anything to do with you.

Also, has Coughlin accomplished much more than Joe Gibbs?? Gibbs can't coach anymore, but Giants fans in glass houses....well, you know the rest.

Ohio State beat Michigan on the road. Michigan beat Florida on the road (yes, Orlando counts as a home game for Florida.) We could go around and around in the Big Ten vs SEC argument.

There's something I don't understand out of this though. People seem to be calling Ohio State a giant turd of a team, yet claiming that LSU is a legitimate champ. Don't legitimate champs have to beat the best in order to be... you know... champs?

Oh, there's a clown here in my new office that claims he likes Texas AND LSU.... uh-huh, we call those FRONT-RUNNERS, dude!

Anyway, he was bashing the Big Ten yesterday and OSU in particular... and while I have no love for OSU, I pointed out that the Big Ten made the title game two years in a row, just like the SEC. And he responded with, "That's because your conference is weak!"

Wait, what? Weak makes you get to the title game? That doesn't even make sense. And then he made the oft-made point that b/c the Big Ten has no title game, that makes it less legit. Okay, but if OSU doesn't lose by a TD to upstart Illinois, they go into the fictional B10 title game unbeaten and probably REMAIN unbeaten because it would have been against Michigan, whom Tressel owns. So what does that prove?

Oh, also, E -- thanks for the lecture. Please be sure to let me know what else I am not allowed to comment on on my own site. Appreciate it.